OK…before we get to some pictures I just have to say a few things about the Bachelor!  I have not really been paying too much attention when it is on because the way Brad talks drives me insane.  He uses way too many adjectives in a sentence for me.   In fact I am usually scrolling the CL app on my phone to see if I can find cool stuff before Angie.
BUT…the last episode when they were in Costa Rica.  Holy Crap.  OK…that rappelling scene with the girls….even the ones who were scared out of their minds did it.  Just to impress Brad.  Let’s face it…he is NOT Brad Pitt.  I would have “messed myself” if I had done that.  Then…the date with Jackie [I think] where they went into a cave with the bats, bugs and spiders.  No Freakin way would I have done that.  I don’t care WHAT was at the end of that tunnel……when everything started scurrying around I would have flipped out in a way that would have made the fighting on the Jersey Shore look like Romper Room.  I think now [at my age] I would have turned to Brad and said…Hey you “jackwagon”I want a better date..this is not going to happen.  Brad is a ding dong.
I went to Scott’s yesterday.  Duh.  Got some good pictures but I think these will be much more entertaining.  Yep…shots of my home decor from 15-18 years ago.  Can you say “edit”…Lord.
This the looking towards my foyer.  I have sense opened it up by removing the closet.  That wallpaper….I so loved it.  It is Boussac Panthere.
Here is a closeup 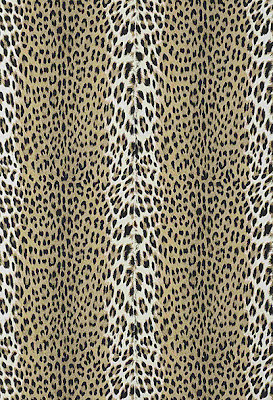 It looked so real you could pet it.  I had that paper for at least 10 years.

Here is the room in the other direction.  I have removed the columns.  I have that cast bronze $3000.00 chandelier up in my attic.  It is huge.  Same DR table except I sold the glass top and added a slab of Limestone. Same couch except it has been recovered.  Can you believe I had a zebra skin?  I remember when BH&G came to scout my house 16 years ago they said I would have to roll up that rug as it may be offensive to their readers.  My dog chewed up a huge corner so I used it to recover a chair.  Note the faux walls…..yep…and I even painted over them with high gloss poly so they would be shiny.  It looks so busy to me now 🙂

This is the guest bath that started it all.  I painted the diamonds and then glazed over it.  I was a glazing fool back then…..I  entered it to Atlanta Homes and Lifestyles for a contest.  I did not win but they ran it anyway in a “small bath makeover” section.  I was beside myself.

That shower curtain.  It is an Old World Weavers fabric and you are going to flip out when you read this next part.  A shower curtain takes 6 yards of fabric and it was [email protected]  WHAT!!!  No you didn’t….yes I did!  I loved it so and did not change this bath until about 5 years ago.  I still have the curtain and I will probably reuse it someday.

Oh I have more….but I am back off to Scott’s today.  Have to get some good pictures for you guys!
Oh and…thanks for all the nice things you said about the guest room…I mean Angies house 🙂