In 2006 we were hired to do a NHL  players home out in Montana.  Better get a cup of tea or coffee because this one could take a while.  Uwe had bought the home when he was into dog sledding…you know like the Iditarod.  It is 90 miles outside of Missoula, in Seeley Lake and had never been furnished except for a few beds and a couple of couches.  It was 7800 square feet and it was a log cabin.  There was also NO  central heat and air.  Yes…. you read that right.  It had heated floors but people it gets 40 below out in those parts.  For real.
He wanted to furnish it to sell so we flew out for the preview and see what we were up against.  Missoula.  Far far away.  I have never been to Montana.  Let me tell you something about those parts.  They wear sensible clothes.  No Jimmy Choos.  If they are wearing a scarf it is to keep them warm…not to make your outfit look cute.  In fact, I bet NO ONE uses the word cute out there.
I don’t have a ton of pictures because my laptop crashed a few years ago and I lost dang everything.  I now have Time Machine.  You only make that mistake once.
It had 5 bedrooms.  There was a young couple who lived there to take care of the property.  [90 acres] We did have use of a truck.  Lets just start with the driveway.  4 miles long…..not paved…..no lights.  Do you know how dark it is out in the middle of no where?  Really dark.  Pitch black.  More on that later.

Lets start with a picture of this log cabin.

This is a view of the back…it is all I have.  If there are some readers from Missoula, then I apologize if it appears that I didn’t like it there…..I mean towards the end of the job I was calling it “Miseryoola”.  Cause they DO NOT have very good shopping.  It might be better now but this was 5 years ago.  I had to buy most of the stuff in Atlanta and have it moved out there.  Especially accessories.  I secured a storage unit and went to Scott’s and shopped like a maniac! We started it in about June and finished in October with just three trips out there.

Here is a picture of the master bedroom.  A lot of yellow wood.  Everywhere…log cabin remember.  We had to get that bed out of there.  Can you even see the bed????

We actually found the bedroom set  in a furniture store out there.  All rugs were bought in Atlanta and shipped.  We had to get this done pretty fast so they could put it in the market,  we did not have a lot of time to waste.  Literally when we would get there we would work from the minute we got up to bedtime.  No TV.  There wasn’t one.  It was hot as the dickens in the summer so we had to sleep with the windows open.  Can I tell you how scared I was when I heard wolfs howling???  There were mountain lions up there so they had to keep the dogs close to the house. You could not go out at night and  one evening a dog [there were 2 house dogs]  brought a deer leg to the front door [that a mountain lion had killed].  How sweet…a present.  You try to sleep…….

Here is the sitting area in the bedroom.

This is a picture of the family room before.  We managed to use the 2 leather sofas elsewhere in a bedroom and one downstairs.  We did not find a place for the chair.  Too bad huh?

Here is after.  Remember Storehouse?  There was an outlet store right down from my house.  Lord I miss that place.  I got all the furniture there.  Had the chair and couch recovered.  The coffee table, red chest lamps and accessories were from Scott’s.

We also had to find someone to do all the window treatments, in a town of 1500 people.  That was hard. Let’s put it in perspective here….Atlanta….. population 2 million.  Missoula…population 57,000.  That was the hardest part of the job, finding painters, electricians and plumbers.

I wish I had more pictures.  We had to do 5 bedrooms, a theatre room, gym, outdoor furniture, kitchen, and foyer.  It was pretty overwhelming at times.  Yes…we did have TV’s put in.  But they were not working while we were there.

Another angle of the den.

There was a whole suite downstairs, another bedroom, gym, laundry room, and theatre room.  We also had to get a small kitchen put in.

This was one of the bedrooms downstairs.

Here is the after. 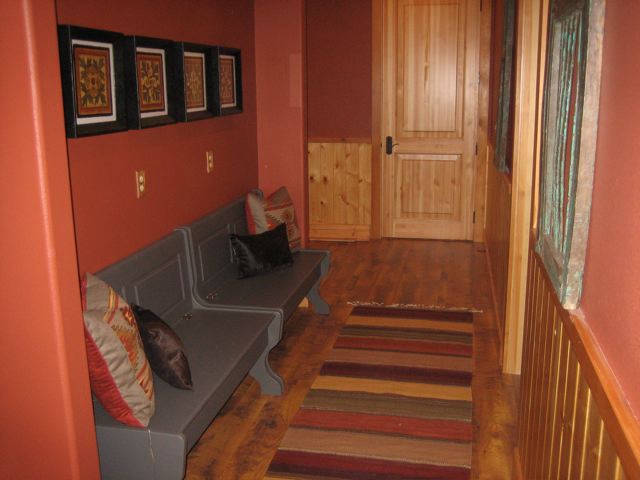 This was a hallway.  We took those benches from somewhere else, painted them and put them together.  I still can’t believe they fit. 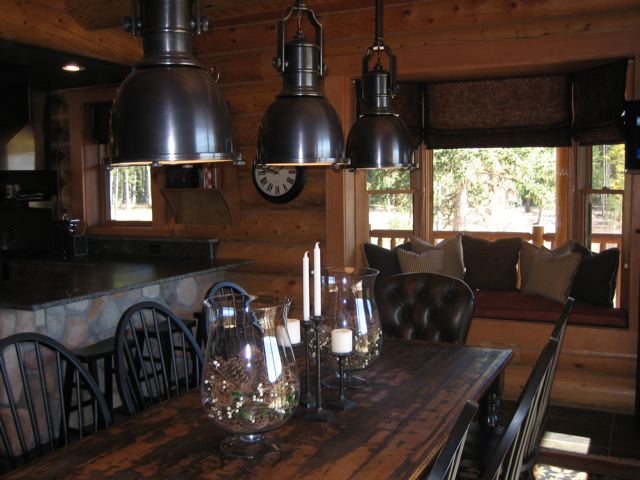 Here is the kitchen.  I don’t have a before but this is the original table which we sanded and re-stained.  Ourselves.  New chairs…new lighting.

This was the den downstairs off that bedroom and the hallway.  Don’t you like how I am all over the place with the order of the pictures?  That is how my life is also…..
Here is one of the leather sofas we reused.

I will never forget the few days before we scheduled the moving van to come to the storage unit.  Getting last minute things and it was July in ATL.  HOT as HELL….I was sweating like a Miami hooker.  The thing is you could not count on finding anything in Miseryoola.  No Homegoods….no Bed bath and Beyond…nothing.  JC Penney and maybe a Sears I think.

Sometimes we would leave the ranch and head into town [90 miles]  drive around and shop all day and then head home.  We really did not want to be driving up that dirt 4 mile driveway after dark.  I am telling you it was scary.  This is where there are bears, lions, and all kinds of animals that I have only seen in ZOO’s.  I think the first night we did it….we were halfway up just shaking with fright and I slammed on the breaks and screamed….just to scare Denise.  I think she messed herself :).  You had to go like 0 miles an hour because it was so bumpy and there were also some turns in the road marked only by a broken branch or something.   After the first wrong turn I can tell you that we started paying VERY good attention.   There were NO neighbors.

As hard as it was there were some fun times out there.  When it was cold we had to wear gloves inside the house to work.  And we were only there in October…I can not imagine winter.  Only radiant heating…remember?

So don’t forget about the swell giveaway. 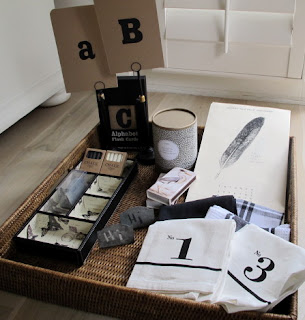 I am going to pick a winner on Thursday.

Have a great week.

May 3, 2021 admin
Angela Simeone fashion Sherry Hart Designs Swoox this and that

THIS AND THAT APRIL 25