You guys remember the house my friend Angie bought with the blue doors?  There was the discussion on whether to keep the color or paint them.  The consensus was NOT to paint or we would have Erin from House Of Turquoise to recon with.
I have a little update about how the renovation is going.  First I have to tell you guys that she is a Craigslist EXPERT [a person who has a comprehensive and authoritative knowledge of or skill in a particular area ].
You will not believe the deals she has found.  Let’s start with the fridge.  Kitchenaide [same as mine] side by side WITH the decorator panel for $90.00 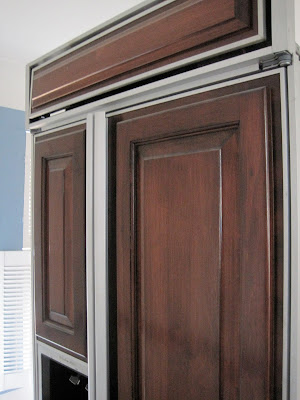 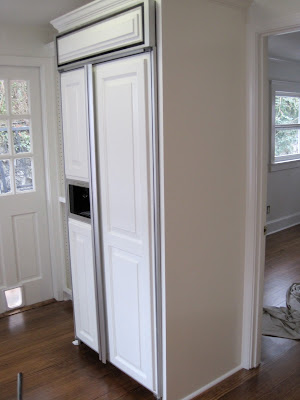 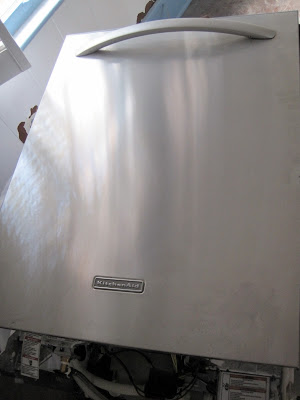 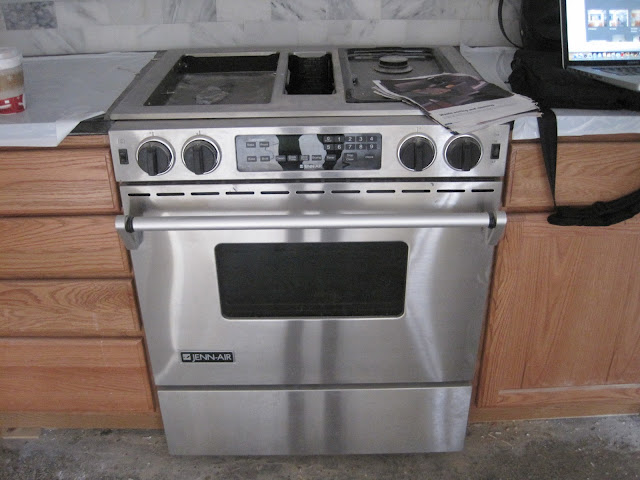 Yep…no dents or anything.  I was just standing there with flies running in and out of my mouth…..shocked.

Here are a few more before and afters… 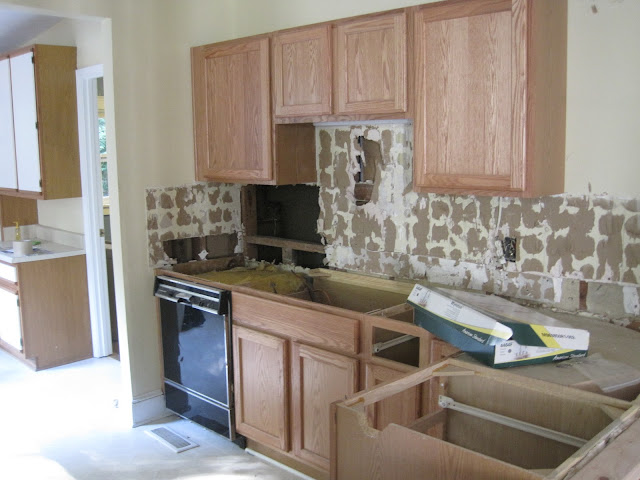 Kitchen…cheap oak cabinets already there…..painted white.  Notice the area to the left.  That is where the fridge had to go as you saw in the other picture above. 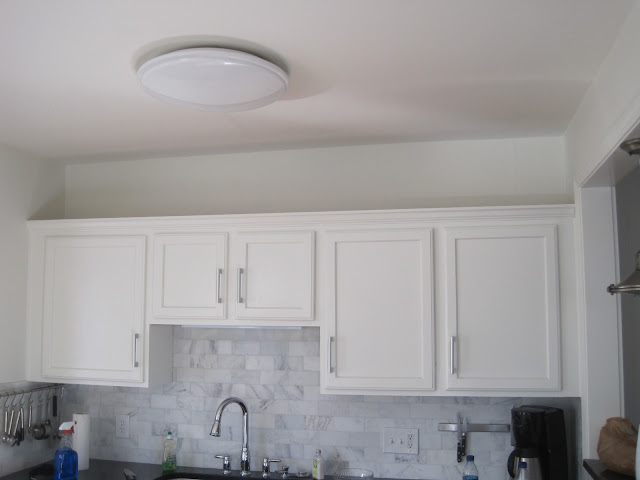 After…painted white…back splash from Floor and Decor, faucet on CL.  Countertop is black granite.  Her husband wanted Uba Tuba…..it took me 20 minutes and 5 pictures of black and white kitchens to persuade him otherwise.  He said that the black had no personality…I asked him “are you going to date the granite?”……WHY do men get so stuck on things…and how can I talk him into something when his own wife can’t????? 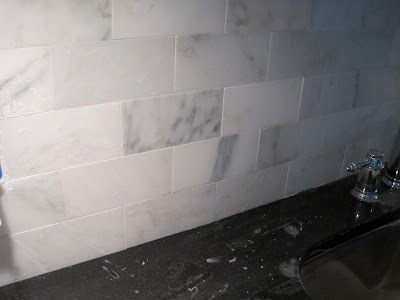 I know that people are sick of seeing white kitchens…but you know what…they just work.  Classic…goes with anything and it is a heck of a lot easier to repaint the walls than kitchen cabinets don’t cha think? 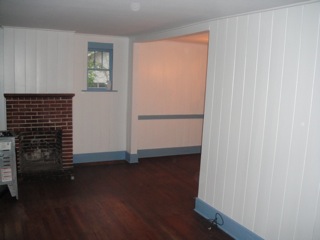 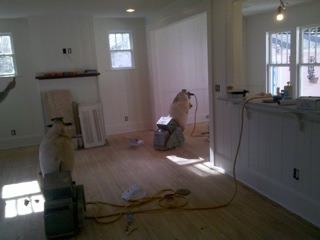 I told her to paint the whole house BM Dove White.  It is a small house and fairly choppy…..Just getting rid of the blue trim helped. 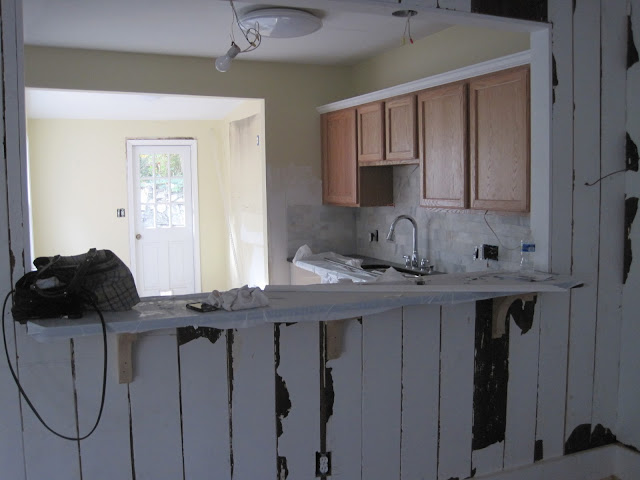 After cutting out the wall….. 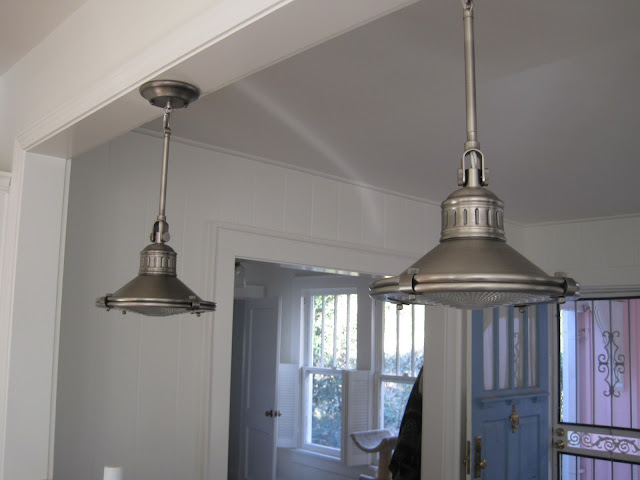 I found these on Overstock or something and then I showed them to her.  SHE then found them on “If you think you have found the best deal….put Angie on it”…..a site I can not seem to find 🙂 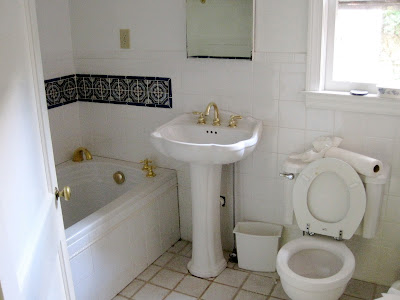 Master bath…..very small.  They pretty much had to gut the whole thing.  Angie found all of the faucets and tile through out the house on CL also.  This vanity came from Ikea. 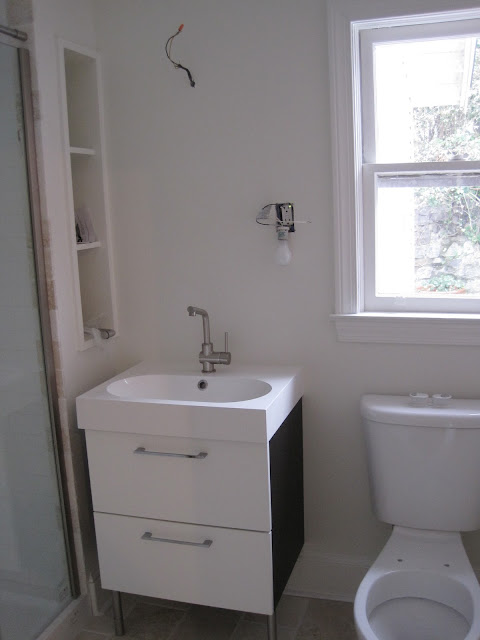 I’ll have more next time I go over there.  All of the furniture was bought on CL.  After she bought one DR table, she found one she liked better.  So she just recently sold it for a $120.00 profit!!! 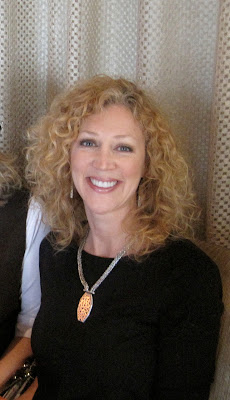 I swear if you need something for a DEAL…this is your girl.

Queen of CL is back

ARE YOU READY TO BRING YELLOW BACK?