Well, here are the pictures of the pillow I designed for “Pillow Talk”.  We were supposed to design a trendy pillow.  Well if we had all done that then there would have probably been 5 “chevron” pillows up there 🙂
I decided to base my design on one of the greats Ralph Lauren.  Trendy for him is classic which explains why his fashions always stand the test of time.  Another thought I had was to use something recycled.  Off I went to Goodwill.
What I found was a great heather wool jacket.  If I was to purchase wool by the yard it would have been $50-100 @yard.  The jacket was $4.59.  Since there was not enough to do both sides I used part of a left over heavy Belgium flour sack.  The other 2 elements of the pillow were new.
Let’s get to the pictures. 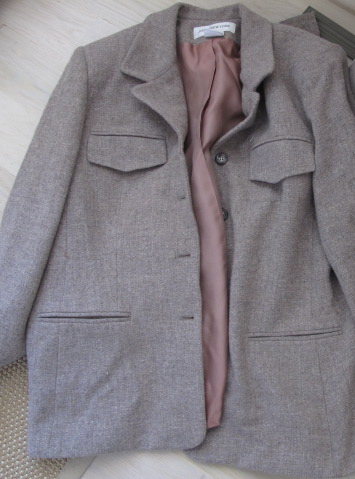 Here is the jacket I started with. 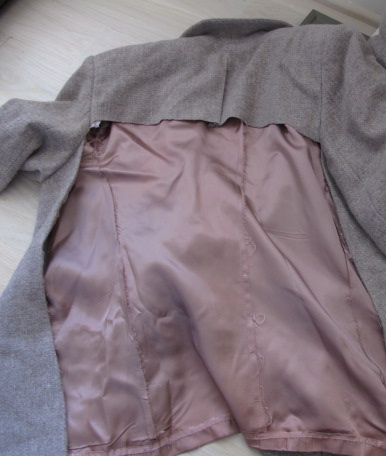 Since there was a seam running up the back we needed an insert to make it big enough for an 18″ pillow.  Here is a picture of the elements of the pillow.  On top is the trim, then the back, the wool and last was some scrim. 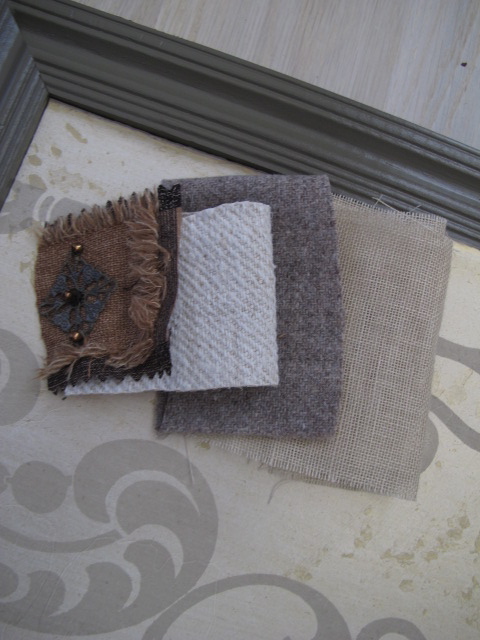 And here are some pictures of the finished pillow 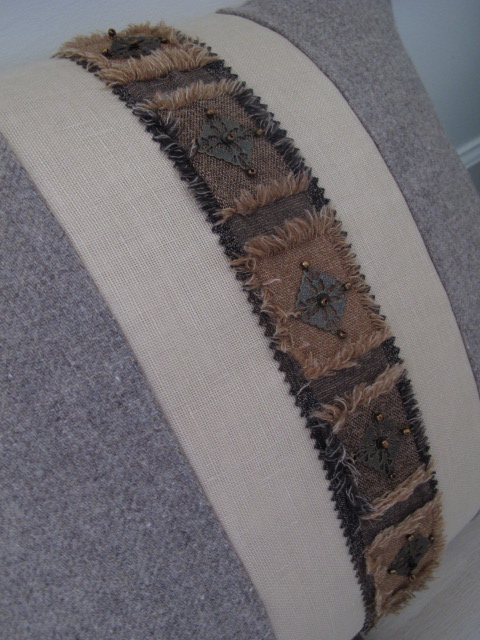 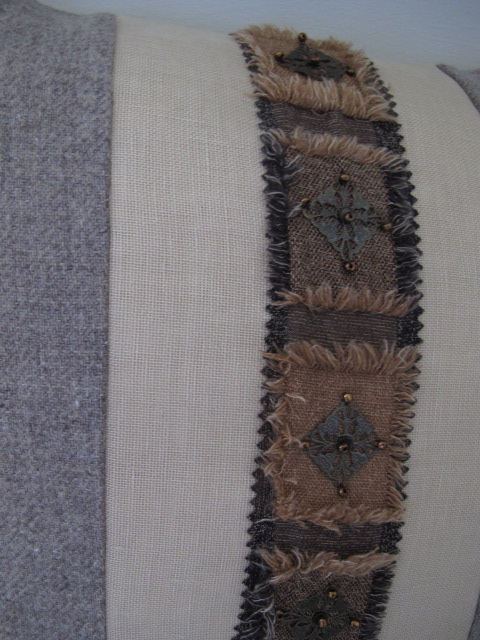 I think the trim really helped tie it all together. 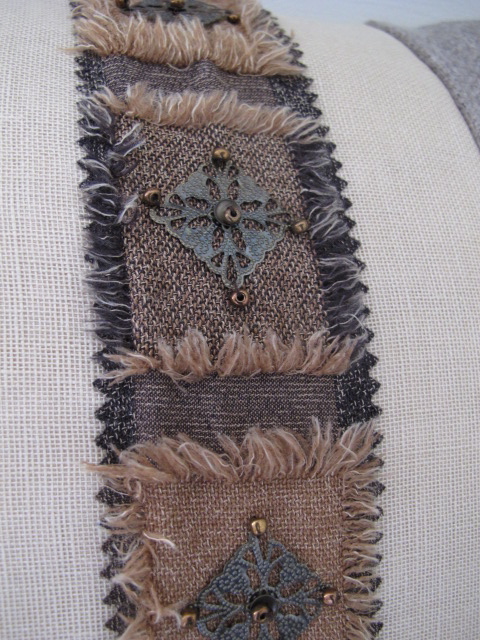 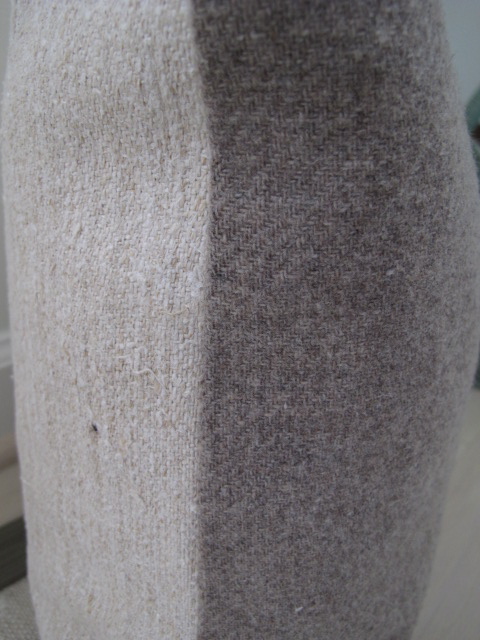 This shows the back. 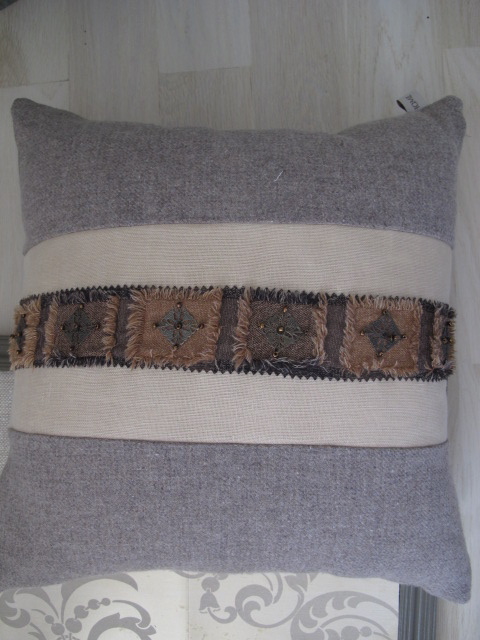 So of course I thought my pillow would look lonely and I wanted to do a mood board around it.  I fought that urge and just painted an old frame, covered some core board with fabric and threw on a sample of one of my favorite Schumacher wallpapers. 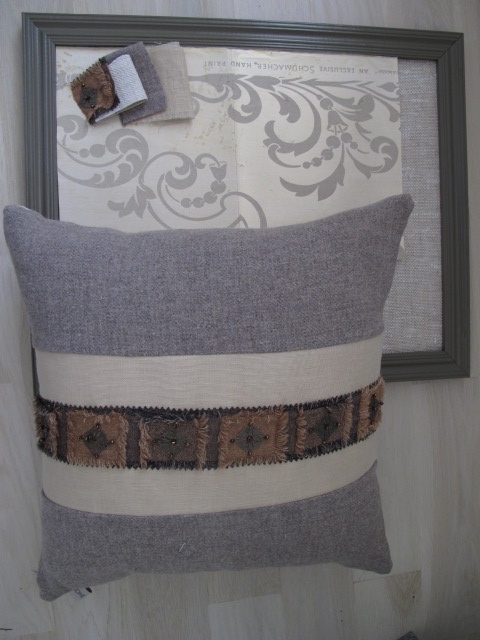 I was invited to participate in this with 4 other very talented design bloggers.  Dayka of Life and Style, Erica of BluLabel Bungalow, Capella of A Curated Lifestyle, and Kari of Buy Well, Buy Once.  Everyone put a lot of thought in their designs and I think they all even sewed theirs.  IF I had sewed mine it would have looked like something made when I was 7 in vacation bible school.  I knew better.  There were no rules just that the pillow had to be 18″.

Here are the other pillows. 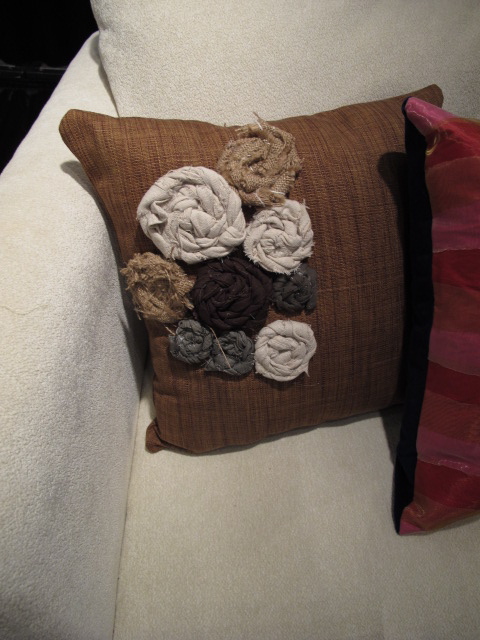 This was Erica’s, and I am so going to try this.  She made the rosettes and I loved the organic feeling of it.

Next to Erica’s was Kari’s.  It was a pink velvet and she made the overlay from strips or organza.  It had a dark navy background.  Capella’s was next and I think this one had a really playful look to it.  She said her sewing machine broke so she sewed it by hand.  Youth.  So innocent.  I don’t care if it was in the middle of the night and it was due at 6 AM….my ass would have been at the fabricators banging on the door like a lion was chasing me.
The last one was Dayka’s.  She also recycled by using a scarf with a pretty navy background.  My observation was that Erica’s and mine could have been used in the same room [similar colors], and the other 3 were almost co-ordinated!  How funny is that? Here is a picture of the scariest part… 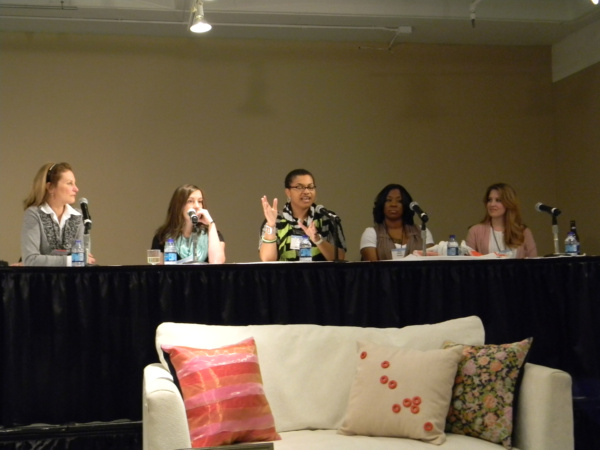 Yep…we had to TALK.  Now you might think because I teach fitness classes that I would be used to this.  Yes and no.  I have no problem with a microphone…..but when I am talking in class at the gym people are busy looking at themselves in the mirror 🙂  After I gave the pillow “talk” I sat down and the moderator had to say “Sherry…what about your blog?”…….Up I stood to finish [whoops forgot why I was there].  Here is a little secret.  We had gotten to the mart early to go though some showrooms and I made the mistake of having a small [really] glass of wine.  Whoo…I was loopy! I wanted to grab the mic and audition for American Idol.  “I believe I can fly…….”

By the way, here is the name of the workroom who fabricated my pillow.  Home Accent.  Her name is Sudi Rafizadeh.  She does incredibly beautiful work and also shows her creations at Scott’s in the South building.

Hope your week is going well.  Pictures of Scott’s on Friday!

DETAILS FROM THE ORC

ARE YOU READY TO BRING YELLOW BACK?